To be able to interact with the physical world or virtual environment, there is the need of form of feedback which is called haptic feedback. Haptics involves a wide range of feedback from tactile senses up to proprioceptive senses using tactile, hybrid or kinesthetic devices. In this research area, we want to deepen our understanding of how the human makes use if the sense of touch and how to improve human interaction with robotic instruments.

In collaboration with Prof. Shervanthi Homer-Vanniasinkam (Professor of Engineering and Surgery), hand surgeons Dr Joseph Hardwicke and Dr Matthew Venus from the University of Warwick and the organisation LimbForge, we have teamed up to create ‘haptic feedback’ – touch feedback  similar to the technology in modern smartphones – for 3D printed body-powered prosthetic hands. An initial prototype of the new hand has been 3D printed which was exhibited at the Science Museum’s Robots Lates event and at Techxlr8, part of London Tech Week.

Our work won the 2019 #MadeAtUCL campaign bringing to life UCL’s impact on people, lives and communities mainly through our ground-breaking research and is published in the IEEE Transactions on Haptics.

Self driving autonomous cars are one of the biggest transforming technologies in the next decades. However, before having fully autonomous vehicles, that are able to complete end-to-end journeys, there will be the need to give back control to the human driver in certain situations. These human-robot handovers lead to safety risks.

Here, we present a concept for a soft robotic driving seat, that serves as an assist to translate the driving control safely back to the driver in an automated vehicle. Instead of using visual or auditory signals, the haptic seat is able to give a more intuitive and less distracting feedback about the actual driving situation leading to safer human-robot handovers.

The work of the #SoftHapticsLab also focuses on ideas of how to implement, design and evaluate novel haptic systems to enhance the human perception in areas of Minimally Invasive Surgery (MIS) (see figure below) and Human Robot Interaction (HRI). We explore analytic and experimental approaches inspired by human bahaviour and embed obtained control strategies into our haptic devices. 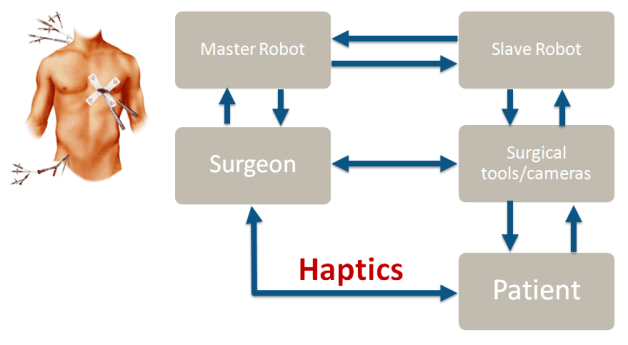 Sense of touch is crucial for surgeons to effectively identify tumours and boundaries, and, thus to achieve successful cancer resections. To overcome the touch information loss which occurs during robotic-assisted surgical procedures, researchers have proposed methods capable of acquiring partial haptic feedback and mimicking the physical interaction which takes place between surgical tools and human tissue during palpation. Under my supervision, haptic palpation systems were evaluated and the combination of different feedback methods were suggested for tumour identification in medical training and robot-assisted minimally invasive surgery using tissue models based on rolling indentation.

We have created a multi-fingered haptic palpation method using stiffness feedback actuators for simulating tissue palpation procedures in traditional and robot-assisted minimally invasive surgery. Soft tissue stiffness is simulated by changing the stiffness property of the actuator during palpation. For the first time, granular jamming and pneumatic air actuation are combined together to realize stiffness modulation.